A Day with Our DOAP Transit Team

A Day with Our DOAP Transit Team 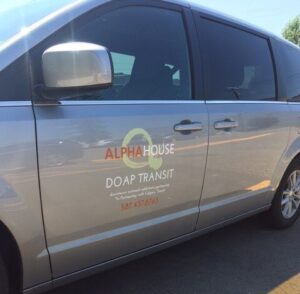 The DOAP Transit (Downtown Outreach Addictions Partnership Transit) team is a partnership between Alpha House Society and Calgary Transit (Public Safety and Enforcement). A DOAP Outreach worker is paired with a Peace Officer from the Community Outreach Team as part of a mobile outreach program dedicated to Calgary’s transit platforms, including c-train lines and bus routes. Seth, a DOAP Outreach Worker, has worked with Alpha House for a year and a half. Kitty, a Peace Officer, was a police officer in the Netherlands for over a decade before immigrating to Canada with her husband.

The team start their day at the Calgary Transit/Bylaw headquarters where Kitty is stationed. Seth picks her up in one of the DOAP Transit vans. Each van is equipped with bagged lunches, first aid supplies, harm reduction supplies, and provides passenger transports (capacity COVID-19 dependent). Much like Alpha House’s other outreach teams, Calgary’s vulnerable population know when they see an Alpha House van, they can ask for help.

The team heads over to Forest Lawn. They’re meeting Jack* and Jill*, a couple the team recently found housing for. Supports provided by the DOAP Transit Team don’t end when someone is housed; they continue to work to ensure that the transition into housing is smooth and, most importantly, that housing stability can be maintained over the long-term. Jack and Jill’s first rent payment date is fast approaching and the couple still haven’t been able to get the proper ID needed to open a bank account. Without a bank account the couple will be unable to pay rent and will loose their hard fought for home.

Kitty and Seth drive the couple to their methadone appointment. While the team was able to get Jack and Jill access to a pharmacy and a methadone prescription, they have hit a roadblock in getting the prescription transferred to a pharmacy within walking distance of their house. In the interim, Seth and Kitty are able to check in and make sure appointments are not missed. This a valuable part of ensuring a smooth hand-off in the transition to independence.

They tell Jack and Jill they have been able to locate a resource center not far from where the couple lives. The center is stocked with computers and printers, where they should be able to access the online forms needed to sort out their ID. Jill shares that when they were homeless their belongings were often stolen. Because of frequency of theft while they were living on the streets, hanging on to a phone or identification was extremely difficult for the couple. Couples also face longer waits for housing as most supportive housing facilities in Calgary are segregated by gender. This means couples end up on a long waitlist for community housing vacancies.

After dropping Jack and Jill off, the team heads over to Sunalta Station. They park the van behind the station so they can check the back alleys to see if there is anyone in need of assistance. Kitty does a sweep of the station upon entry. She checks behind ticket machines, in the corners and on the support beams to see if there is anyone sleeping. She says she once found someone sleeping on one of the window frames 100 feet in the air.

Keeping an eye out on the platforms, she spots someone across the station smoking inside. She calls over and motions for him to put out his cigarette. He obliges and appears to leave the station. A man arrives at the station without a mask and approaches Seth to ask if he has an extra one. Seth takes him back to the van to get him a clean face mask.

Once on the train the team does a quick scan of who is onboard and if anyone looks in need of assistance. The team immediately spot a pair they are familiar with and head over. The woman is clutching a bag and keeps dropping her clothes. The team asks if they need any support. They say they’re on the way to a shelter right now and thank the team for their interest.

As the train pulls into each station the team keep an eye out for anyone in need of assistance on the platforms. Kitty motions for us to get off the train and we immediately see why. Two men are in a train shelter and are about to begin smoking a pipe. Kitty explains they can’t do that on transit property. The men put the pipe away and move off. This is not the best outcome but the team sees they have a naloxone kit with them. It is moments like this that offer a great example of the importance of supervised consumption sites. Using alone is dangerous, using in public presents other dangers. Supervised consumption sites allow individuals to use in a safe environment while being connected to supports that can help move them towards stability.

A call comes with a report of someone using on a transit platform. When Kitty and Seth arrive at the station, they find a man holding up a woman who can barely stand. It is clear she has been using and from her body language they suspect the woman is on the verge of overdosing, but she declines the offer of Naloxone. Kitty and Seth stay to monitor the situation. A transit van waits by the platform to provide back up, if needed. After several minutes, the woman is steadied by her companion and they head off together. Kitty shares that she has interacted with this woman many times over the past three years, trying to support her housing and recovery goals. She has so far been unable to support her into long-term stability, but Kitty still looks for ways to help her when and where she can.

Throughout this interaction, a man has been shouting in the background, trying to get the team’s attention. Assessing that he is unconnected to the situation at hand, the team ask him to wait. He gets on the train and Kitty sees him approach a mother with her baby. Kitty intervenes before he is able to engage with the mother to make sure she’s doing okay and stays with her until the man moves off the train.

The team heads back to Sunalta station. Behind the station there is a couple waiting by the DOAP Transit van. They ask for a bagged lunch. Seth grabs two for them. The couple share a bit of their experience. In order to stay together they tend to camp in a park but it causes intense problems for John’s* back. Most days Sarah* needs to lift John out of their tent because his back is so bad. They are on the wait list for housing, but don’t have any idea when they’ll reach the top. They are both on methadone but it doesn’t do as much for John’s back pain as other substances they previously used.

The needs of Calgary’s vulnerable population on the train line are complex, and supporting people’s transition into stability requires a varied and dedicated response. The DOAP Transit program includes 3 other pairs like Kitty and Seth. The team consistently goes above and beyond in their work to reduce unnecessary or inappropriate use of transit services and their work helps to address unmet needs and improve the circumstances of vulnerable Calgarian’s.