A Day with Our Encampment Team 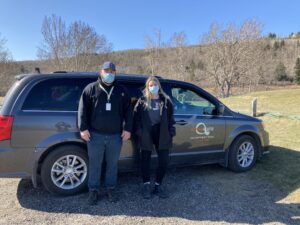 Two members of the Encampment Team, Cody and Brianna, stand beside their van in Stanley Park.

Today, Alpha House’s Encampment Team begin their day in Stanley Park. They have received a call from Calgary Community Standards’ Peace Officers (A.K.A Bylaw) about someone “camping” in the trees. The Encampment Team are a mobile response unit supporting “rough sleepers” with service navigation for shelter, housing, medical, or mental health programs in the city. Rough sleepers are individuals who sleep or camp in places not meant for human habitation and they do not typically use Emergency Shelters.

The program works alongside authorities like Bylaw; a crucial partnership that plays a major role in the team’s ability to support clients. While rough sleeping and camping are not encouraged by the City of Calgary, the Encampment Team’s relationship with Bylaw helps reduce displacement for those camping. When managing a community tip-off about a camp, Bylaw will share location information with the team to give them an opportunity to work with the individual(s). Constant relocation is both harmful to the wellbeing of the rough sleeper and counterproductive to supporting someone into housing or other social services. Finding a new campsite can be challenging and can cause delays for service accessibility.

Cody and Brianna form one of two Alpha House Encampment Teams. This isn’t their first time trying to make contact with the person camping in Stanley Park. They head into the trees and find a tent on the side of the hill, hidden from view of the road.

“Hello this is Alpha House, is anyone home?” Cody calls out. He waits a minute for a response. There is silence. He asks, ‘Do you need a lunch?’ Still no response. They wait another minute before concluding the individual is not around and move on to their next call. Sometimes the team will need to visit a site multiple times before making contact with someone. It’s hard to predict the hours someone will be around given the circumstances.

A client calls while the team moves on to their next stop of the day.

The supportive/affordable housing system in Calgary can be finicky to navigate. Part of the process includes frequent check-ins. This particular client has called to check in and to request some bus tickets to get to an appointment. The in-person interaction is brief but compassionate and respectful. Despite a non-descript parking lot as its location, this meeting is an important engagement in the team’s relationship with the client. Trust takes time to build.  This interaction, as with all client interactions, is recorded by the team. The client’s consistent engagement means one less barrier for housing.

A check in can be as simple as a client calling to say hello and to note their continued interest/unchanged circumstance but it can also include updates on client needs or reports of a camp relocation. The more engagement, the less the likelihood of a delay when a housing unit becomes vacant. Units rarely sit empty for long as the demand for affordable and supportive housing in Calgary greatly outstrips the supply.

Alpha House is one of many organizations who provide supportive housing in Calgary. The Coordinated Access Assessment program provides oversite and management for Calgary’s affordable housing system and is run by the Calgary Homeless Foundation – working in collaboration with a number of housing providers to support clients toward housing that best fits their needs. Best-fit considerations can include the need for medical or old-age care, mental and physical health challenges, and even a client’s connection to a certain community.

The team’s next stop is Bowness. Their goal is to check in on J, who is camping at the bottom of a very steep, forested hill. His camp is well hidden and difficult to access. From the top of the hill Cody calls out and J answers back to say he’ll come up. J has a cell phone provided by Alpha House, but it has run out of minutes and J hasn’t been able to check in recently. He says he has some bottles he’s going to take to a depot today to buy some minutes for his phone. He has a teenage son that is just learning to drive and J wants to use his phone to get updates on how his son is doing. J also has a caseworker he’s been unable to reach because of this.

Cody calls J’s case worker for him. J has been approved for housing and is waiting for the unit to become available. After speaking with the caseworker, Cody shares the good news that J’s new apartment will be ready the following Monday. J only needs to wait for a few more nights before he’ll be able to move in. Before leaving, Brianna gives J a lunch and asks if J’s friend is still camping down the hill. J says he is and accepts a second lunch to pass along. He thanks the team and expresses how excited he is to move into his home.

Still in Bowness, the team meet with G. You would only be able to find G’s camp if you already knew it was there. Hidden in thick foliage, G has further camouflaged it with green tarps that act as wind breaks and walls. He has also constructed a work bench for himself and he tells the team he has just put up a second tent to use as a closet for his clothes. His main shelter is a sturdy tent. He has put down foam mats as floor tiles. The camp is one of the more elaborate setups the team have seen.

G has been trying to apply for the Canada Emergency Response Benefit (CERB) and the team have come to check in and inquire about his progress. He places a few hurried phone calls trying to track down invoices as proof of income. G works as a general contractor but lack of income due to COVID-19 meant a loss of housing in May of 2020. He is on a waitlist but hopes that CERB will give him the money he needs for a damage deposit and first months rent.

The team stops for lunch around midday. This afternoon they have booked in a client to do a Needs and Services Questionnaire (NSQ). NSQs are one of the requirements to access the affordable housing system in the city. The Encampment Team are one of only a handful of groups that can do NSQs. After their meeting, they’ll be back in the van to speak with more clients.

Cody and Brianna both say the best part of the job is watching clients progress to housing and how rewarding it is to have a role in supporting that transition, particularly when they get to be with a client on move-in day and experience that individual’s excitement and relief.

Individuals sleeping rough face significant barriers when it comes to housing. Even before the process of NSQs and wait lists, they face constant displacement, cold nights in a city well-known for its frigid winters, food insecurity, the threat of tickets for violating certain bylaw (which they may weigh against the dangers of not being able to use a fire to keep warm at night or eating cold food perennially). The list goes on.

The Encampment Program is able to respond in real-time to client needs to ultimately remove some of these barriers and transition individuals into stable housing. Alpha House is excited about new developments with its Encampment Team and our ongoing partnership with CCS and we encourage you to keep your eye on our social media and blog for updates! 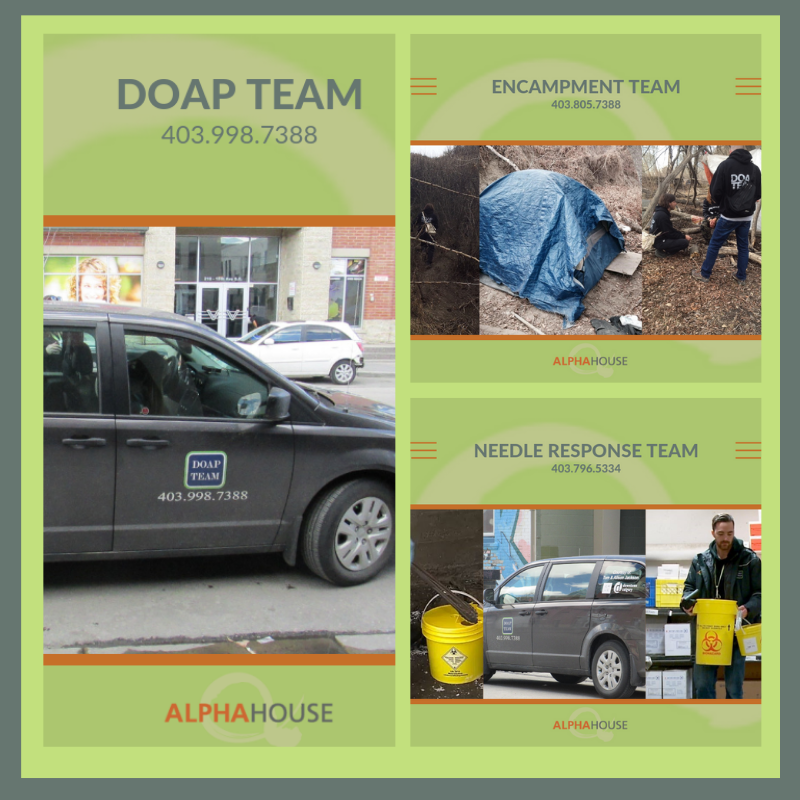 We finally have some warmer weather on our hands and that means a number of different things. With snow no longer in the forecast and no longer on the ground, re-exposure of the land means you might notice needles or other debris on your commute to work, school or on your way home. If you spot a needle on either private or public property, don’t hesitate to give our Needle Response Team (NRT) a call. Operating five days a week from 8 AM – 6PM, the NRT is trained to properly dispose of needles 403. 796.5334.

Another thing you might notice as the weather continues to warm up is an assortment of “rough sleepers” – this is a term used to describe individuals who are camping or sleeping outdoors in public areas. Alpha House’s Encampment Team are a mobile response unit that connects with individuals who are “camping” or “sleeping rough” outside, with the goal of helping individuals secure housing, visit the doctor, get to a shelter, or anything else they might need. If you notice a camp, we encourage you to call the Encampment Team at 403.805.7388.

The warm weather also creates the potential for overheating, dehydration, and sunburn. If you see someone on the street who may be in distress, please get in touch with our DOAP (Downtown Outreach Addictions Partnership) team at 403.998.7388. Should someone be in need of immediate assistance, please call 911.

Our Encampment team works within Calgary to connect with those roughlseeping to try to get them into housing. There was a recent article in the Calgary Herald who spend time with the CPS Marine Unit who referred to work of the Encampment Team. If you come across a camp site or know of someone sleeping outside then please contact Encampment 403-805-7388. 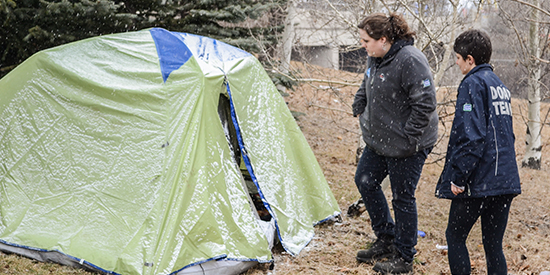 We were pleased to be able to connect with CBC Calgary and share about our Encampment Team, our housing program and share a common story in terms of how housing really benefits people experiencing homelessness. Duane was certainly kind enough to share his story.

Which city are you looking for?