How an Unhoused Veteran Found His Home 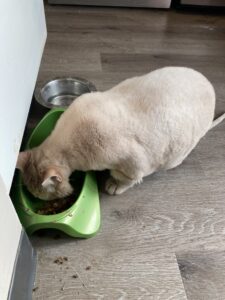 Frank is a resident of Madison Place. An apartment building managed by Alpha House Society for previously unhoused Veterans of the Armed Forces, Air Force, Police and Fire Departments. Clients at Madison Place work with on-site staff to manage past or current addictions, improve their health, and engage with the community. Frank is one of the longest residents of Madison Place, which has been operating in Calgary’s Beltline since 2012. His cat, Buddha, lives with him and his wife, Amanda, lives only a few blocks away. Buddha spends most of our interview sleeping; at 21 years old he is well looked after and spends most of his time dozing in the sun next to Frank.

Originally from Eastport, Newfoundland, Frank was born the middle child in a family of 12.  His mother ‘never stopped,’ he says, and passed away only a few years ago at the age of 92. His father worked cutting railroad ties in Nerranova, ‘Back in Newfoundland, we were poor people,’ he says. ‘So I joined to help my family out’.

When Frank enlisted, it was ‘August 1966, I still remember it was August’. He was stationed first out of Murphy Barracks in Ontario and was a paratrooper – ‘a jumper,’ he says. And then a sniper. Smiling, he quips that when he first joined his Newfie accent was too thick for his sergeant to understand. ‘I used to get away with murder’ because of it, he says. ‘I loved being in the Army’.

Frank travelled to Greece, Cyprus, Germany and many other countries before eventually being stationed in Currie Barracks in Calgary. When he left the Army in 1983, he decided to settle in Calgary, because he liked the look of the place and made it home.

He left the army because of drinking, he says ‘Drinks were free on the barracks and you get bored. They sent me for treatment for it once. Any part of the Forces there is a lot of drinking.’ After leaving the army, Frank started working as a painter, which he did until he was 64, only retiring because of health concerns with his leg.

Frank eventually ended up living on the street with his wife Amanda. He was living under the bridge near the Elbow River Casino, but he doesn’t speak ill of those experiences. ‘I don’t like being confined’ he says ‘I like being outside, all times of year. It’s cold by the river but I enjoyed it. I’d go into the casino to shave, it’s open 24 hours a day. Cops would visit, bring coffee and sandwiches. When they found out I was a veteran though they got mad.’ Over Christmas, he and Amanda had been gifted a hotel room for a week when the two cops he had become familiar with helped get a place to live with Alpha House.

He didn’t want to move without his wife though, so Alpha House helped get her a place at a housing program with the YWCA a few blocks away. Because of house rules around the COVID-19 pandemic, Amanda can’t visit Frank. But he’s able to go over to her place two days a week and they meet up outside. He has two daughters and a son back in Newfoundland. He speaks to them on the phone often and last saw them two years ago at his brother’s funeral. The Veterans Association and Alpha House helped him with his flights, and looked after Buddha while he was away.

‘The staff here are excellent’ Frank says. Because of health concerns with his leg he’s in a mobility scooter but staff here have worked with the Veteran’s Association to make sure Frank is well looked after and his scooter is in good working order. Before Christmas, he spent 28 days in hospital but Frank is tough and describes his health issues as more of an inconvenience than a concern.

Frank is active in the community. Outside the building next to the Canadian flag there’s a dog bowl that is kept filled so locals walking their dogs can take a break. In the summer time, Alpha House Staff at Madison Place host frequent BBQs with clients and the community. Frank says he spends a lot of time outside talking to people experiencing homelessness and doing what he can to help whether it be listening to their stories or giving them a meal. He frequents the Kirby Centre and the Legion, which in non-COVID-19 times provides low cost and free programing to seniors. Frank loves living in the Beltline in the summertime because of all the events happening from the public pianos to concerts in Olympic Plaza.

He’s due to get his vaccine before too long and is looking forward to when life starts getting back to normal. He misses being able to have his wife over and to visit with his friends still living on the streets. He’s getting sick of TV but enjoys a few shows like Schitt’s Creek. He describes the community in the building as being very supportive and all great guys. ‘Life is what you make it. I enjoy every day I’m alive,’ says Frank.

Calgary Alpha House Society was established in 1981 as a committed response to a marginalized population of men and women who are addicted to alcohol or other drugs and living vulnerable on the streets of Calgary.